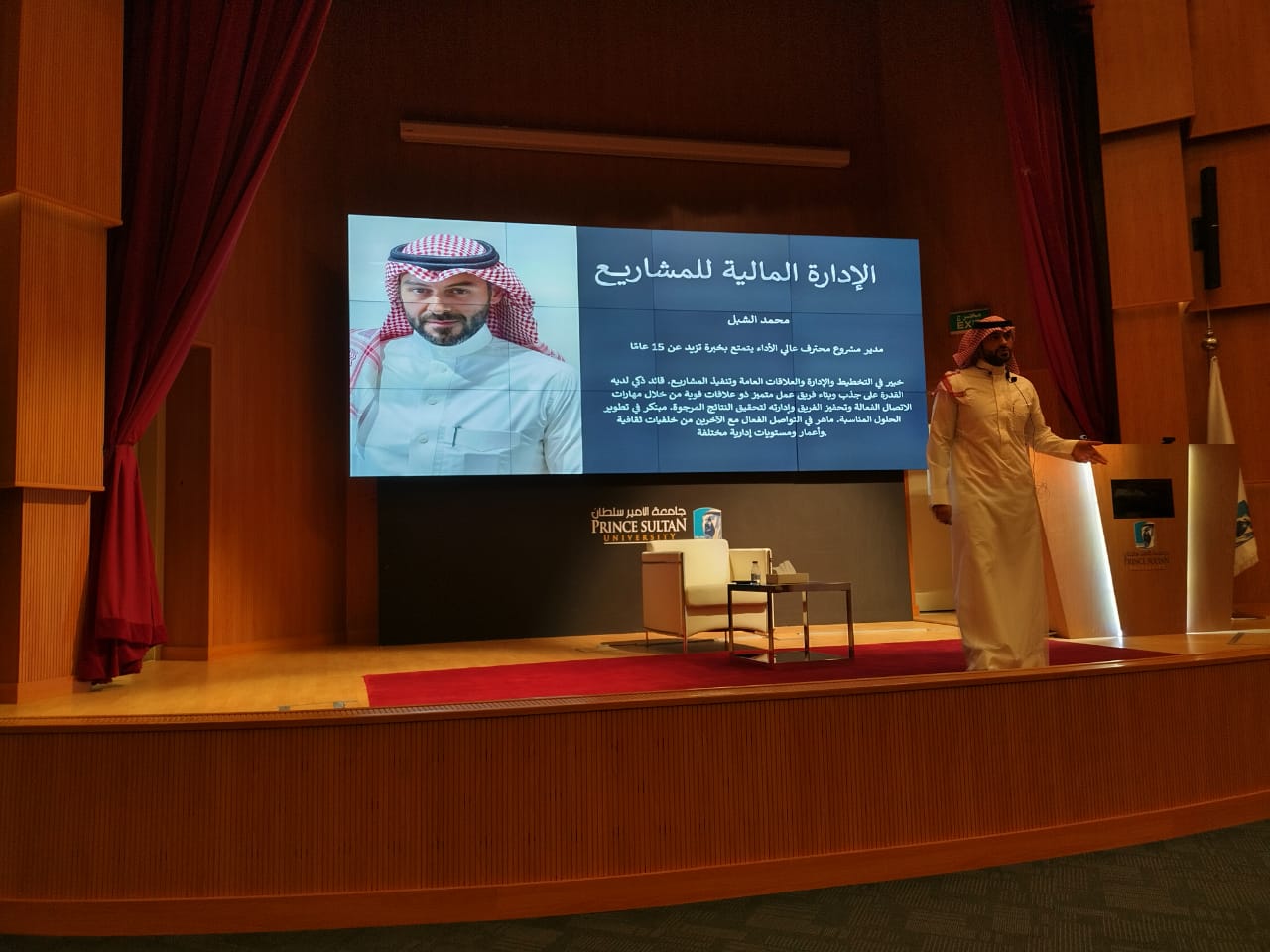 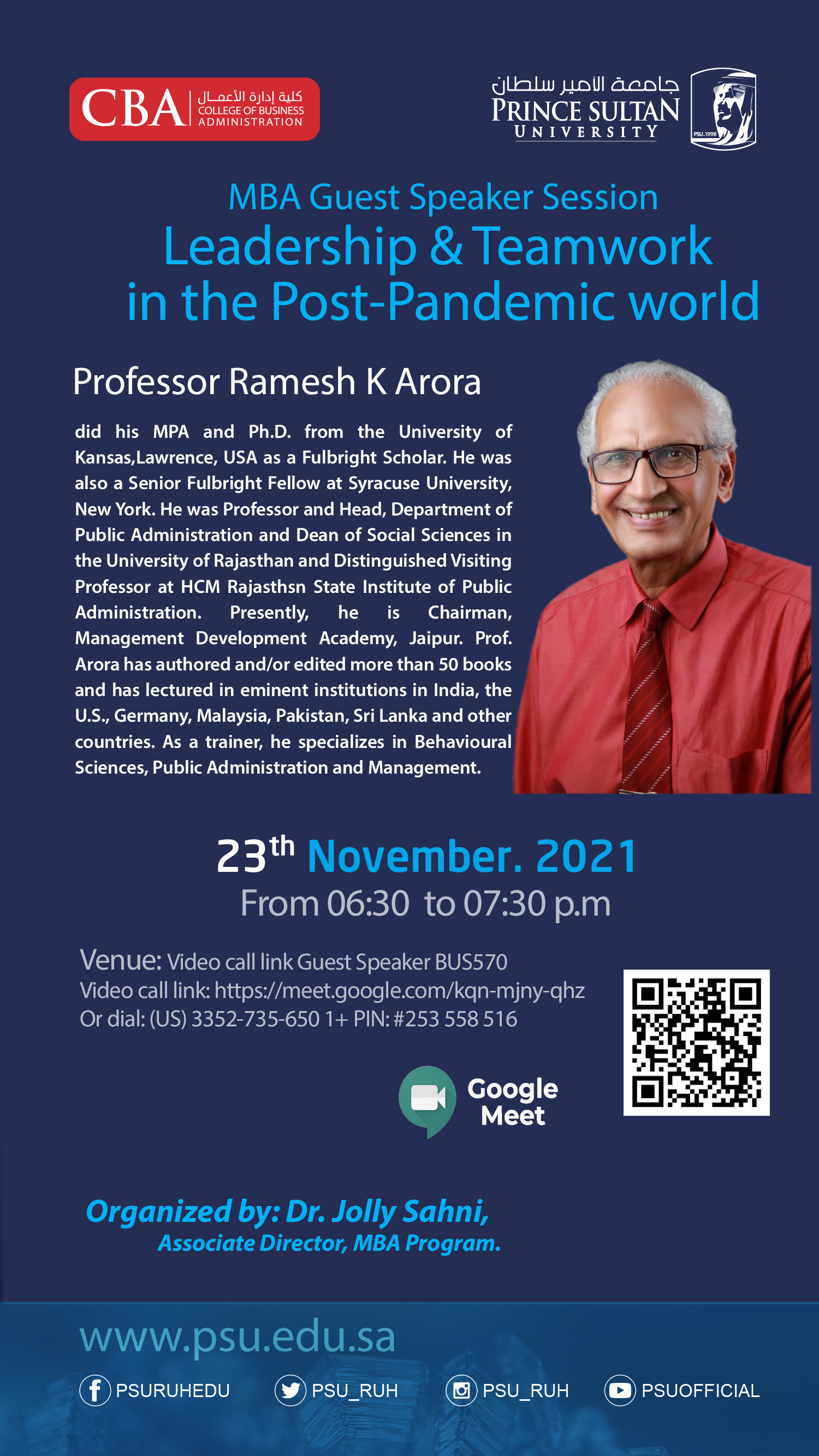 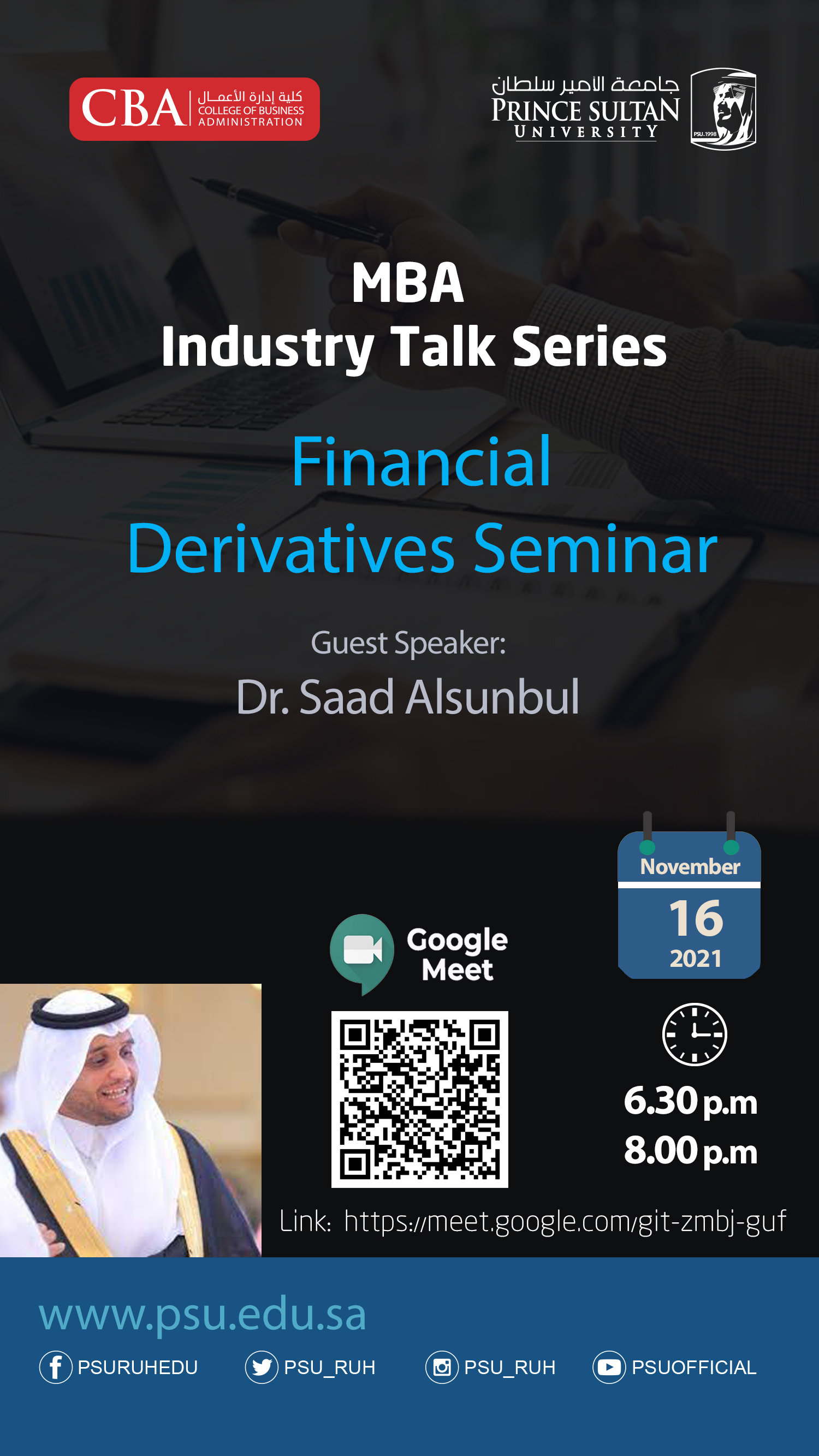 On Tuesday, November 16, 2021, the MBA Program/ Female section hosted yet another session of its Industry Talk series featuring Dr. Saad Alsunbul, an Assistant Professor and the Director of...

On Tuesday, November 16, 2021, the MBA Program/ Female section hosted yet another session of its Industry Talk series featuring Dr. Saad Alsunbul, an Assistant Professor and the Director of the E-MBA Program at Alyamamah University in Riyadh. Dr. Alsunbul delivered an informative webinar on the use of financial derivative instruments in financial markets both internationally and locally. He discussed the nature of financial derivatives, their four different types and the main four goals they serve, hedging, speculation, changing the nature of a liability, and changing the nature of an investment. Each single type of derivative received special attention from our guest speaker, highlighting the major differences in structure, size, platform and goal of each. Future contract for instance, are agreements to buy or sell an asset at a certain time in the future for a certain price known as the future price; while the spot contract deals with buying or selling the asset immediately. Next on the agenda were the forward contracts, OTC agreements to buy or sell an asset at a certain time in the future for a certain price known as forward price. A detailed comparison between futures and forwards was also covered where MBA students were able to grasp the major differences between the two highly similar derivative channels. Options were discussed next, highlighting the two different types, puts versus calls, in addition to the American versus European designation. The platforms on which options are traded were also covered; organized exchanges and over-the counter markets. Finally, swaps were also explored; they are agreements between two companies to exchange cash flows at specified future times according to certain specified rule. Five types of swaps were explained: Interest rate swaps, currency swaps, equity swaps, commodity swaps, and variance swaps. Each single type of derivatives was carefully explained, listing its exclusive features and the purpose it serves. A plethora of numerical examples for illustration purposes were also provided throughout the webinar, where Dr. Alsunbul kept an interactive environment by involving the students in solving the problems and answering the questions. The session was wrapped up by discussing the current situation of the derivatives market in Saudi Arabia and the future of derivatives in the kingdom. MBA students were exposed to the novel field of financial derivatives and their rising popularity as new promising financial mediums to hedge against risk and enable market participants to use them to their benefits. The students took the floor to ask questions with the guest speaker further elaborating on the subject matter. The session was organized by MBA instructor, Dr. Rhada Boujlil.